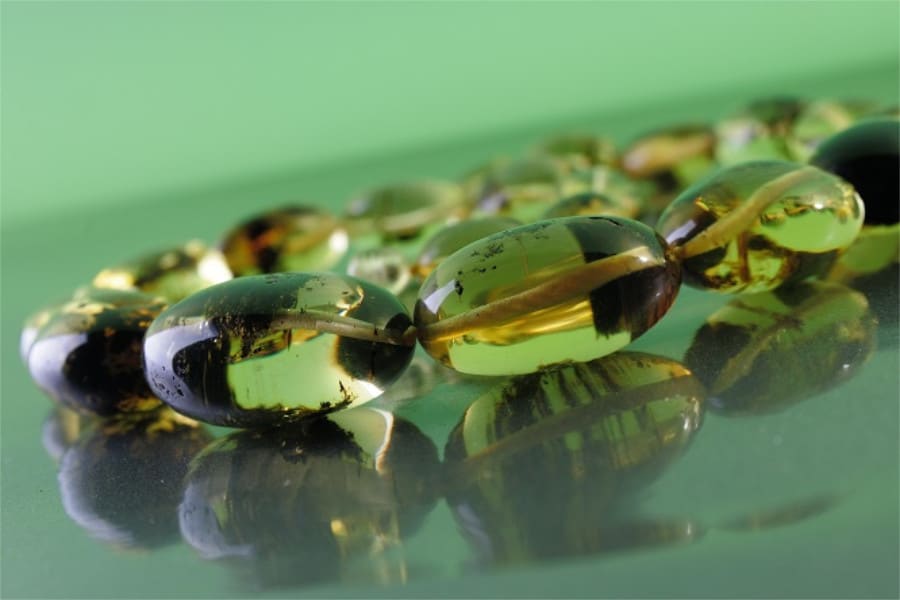 Amber can basically be divided into varieties and types by its place of origin and occurrence. Its diversity, beauty and uniqueness are determined not only by the region in which this "amber" was created, but also by the conditions and type of raw material from which it was created.

Over a hundred varieties of fossil resins are known worldwide. Below are the characteristics of the two most common - Baltic amber and Colombian copal.

Let's start with the most valuable in jewelry and amber - Baltic amber. As we already know, Baltic amber is a fossil resin of coniferous trees, formed at least 40 million years ago, with a succinic acid content from 3 to 8%. Amber is an "eternally living stone" that manifests its life with color changes. This happens as a result of the action of air, light, and also by changes in humidity and temperature. Changes in the color and structure of amber are noticeable after 15-20 years. Light colors are becoming more orange, red, overgrown with bark.

The Colombian copal is a young fossil resin of deciduous trees with a content of less than one million years, with a content from 0 to 3% of succinic acid. It is a greenish-yellow resin. The Colombian copal also has a much lower hardness than Baltic amber. To be suitable for jewelry, it must be hardened in an autoclave several times. Occurs quite often as an imitation of Baltic amber, then has "amber colors" - milk, cognac, lemon, cherry; scales are also possible.

So, ask yourself - how do you check what we're really dealing with? There are various home methods, e.g. rubbing cotton wool immersed in acetone, hot needle, etc. ... Unfortunately, these methods will not work in an autoclave hardened copal. What to do then? The most reliable result is a spectrometer test. After receiving the infrared spectral curve - we get certainty.

Below is a brief description of infrared spectral curves - for Baltic amber (Photo 1) and Colombian copal (Photo 2).

The most typical diagnostic feature of the IR spectrum of Baltic amber (succinite) is the so-called '' Baltic arm '' - a flat area of the spectrum in the region of 1250 - 1175 cm-1. The Baltic arm is limited on the right with a sharp maximum at 1150 ± 15 cm-1. Other important features in the succinite spectrum are, among others, bands at wave numbers around 995 ± 15 cm-1, 888 ± 1 cm-1, 1645 cm-1 and 3080 cm-1. The older the amber (the degree of weathering) is, the flatter the Baltic arm is, and the remaining spectral bands are also smoothed out. The same type of resin as succinite is found in Ukraine, Germany and Sambia. Thus, the appearance of the spectra is very similar, regardless of where the amber is obtained - it retains the pattern characteristic of Baltic amber.

The spectrum of the Colombian copal is distinguished by a greater number of spectral bands and narrower and more clearly separated peaks compared to the spectrum of Baltic amber. First of all, in the spectrum of copal we do not see the "Baltic arm", which is the diagnostic section of Baltic amber. The band is clearly marked by the bands at wave numbers around 888 ± cm-1 and 1645cm-1 and 3080 cm-1. With a high degree of sample conversion, the mentioned bands can be significantly weakened. In the characteristic range of Baltic amber, there is no flat spectrum, the area of 1150 - 1260 ± cm-1 is characterized by two intense peaks separated in the range of 1218 ± cm-1.

The spectral analysis of the materials provided also shows that based on their FTIR-ATR spectra, there are no major difficulties in distinguishing Baltic amber from copals, and even more imitation of amber from modern resins.

A precursor of the trend for natural forms in jewelry