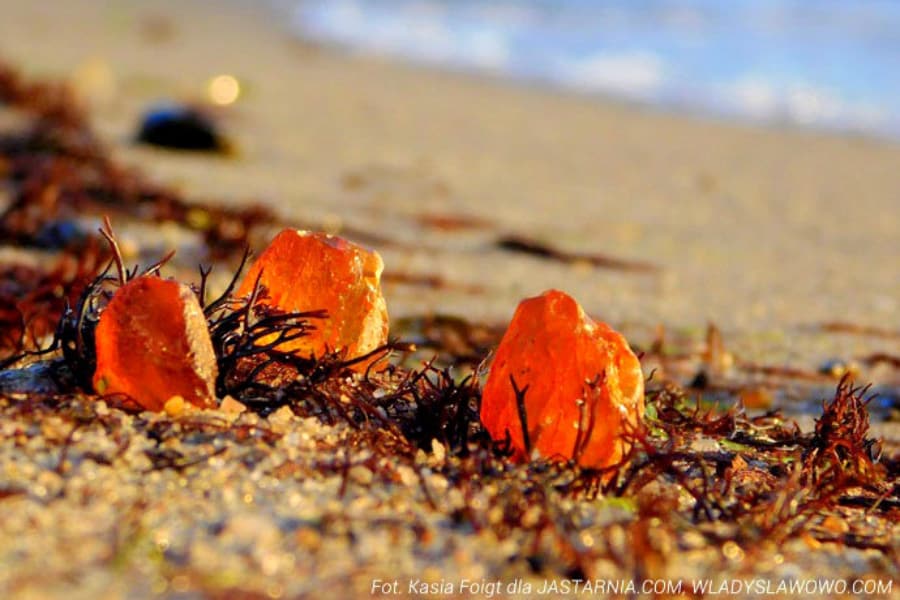 Sunny stone - Baltic amber - is invariably associated with holiday trips to the sea, searching for golden particles on the beach in hot sand in the company of the sound of waves and the screams of seagulls. However, there are other methods of extracting this valuable resource, more about them below!

Already in the sixteenth century in the work of M. Kromer "Poland, or about the location, population, customs ..." there is a mention of fishing for amber: "[...] thrown out by the waves towards the coast, they catch the undressed naked wandering people in small nets electricity". Therefore, it was common to fish with amber with a cashmere (net fixed on the rim) directly from sea water [2].

Later, in the eighteenth and nineteenth centuries, digging sandy beaches and "rummaging" - that is, agitating the sediment at the bottom of the sea with wooden poles - so that the lumps of amber found there would have a chance to rise to the surface of salt sea water gained popularity. Interestingly, a diver's suit was constructed specifically for amber enthusiasts diving behind amber at greater depths. Unfortunately, this outfit did not so much help as it interfered with fishing for amber due to the considerable weight as well as the inflexible nature of the material - the fisherman could only be in a standing position, which unfortunately was not effective in obtaining the raw material [3].

Currently, these traditional methods of obtaining amber are still used. Fishermen dressed in rubber overalls with porridges collect the marine sediment in a net and search the collected material on the shore for amber. The best results are obtained after a storm with a strong wind (more than 7 on the Beaufort scale). Fishing is dangerous, so seekers of this precious treasure immerse themselves in water no deeper than their knees, it requires a lot of patience and a good dose of luck.

Amber is extracted on an industrial scale by two methods: opencast and hydraulic. The first of these - the open-pit method - involves opening the mine, removing the overburden of unnecessary (barren) rocks to gain access to layers containing Baltic amber. In such mines, all works take place on the surface of the earth, relatively large lumps of Baltic Gold are quite often found. Such mines are located on the Sambian Peninsula in Russia and in Ukraine. In Poland, amber is not mined by this method due to the deeper location of amber bearing layers (~ 120 m below the surface) than in Russia and Ukraine (~ 60 m) [1].

The hydraulic method also requires removing the soil layer, but this is only due to technical reasons (overgrown soil would prevent the use of this method of extraction). Then a metal sheet 5-6m wide is driven into the soil to form a pen. Within it, water under high pressure is injected into the trough, which disturbs the soil and flushes out the spoil deposited on the network stretched at the mouth of the farm. The so-called "garbage" (which consists of dry plant fragments and other organic debris and small ambers) is separated in a large container with brine - amber floats on the surface of salt water due to its low density, and organic debris absorb water and fall on bottom. The main disadvantage of this method is the inability to extract larger lumps due to their relatively high weight - despite the high pressure water jet - they remain below the surface [1].

The search for amber deposits is carried out, among others, by studying specialist literature, cartographic materials, descriptions of boreholes and using, among others, geophysical methods [4].

Regardless of the method of obtaining amber, it is then sorted by size. The larger the nuggets, the higher the raw material prices. Lumps exceeding 1000 g in weight are rare, and those weighing more than 3,000 g are unique, such lumps are priced individually. The largest lump of Baltic amber found weighed 9750 g. It was found in Rarwin, near Kamień Pomorski. It is currently owned by the Natural History Museum in Berlin [1].