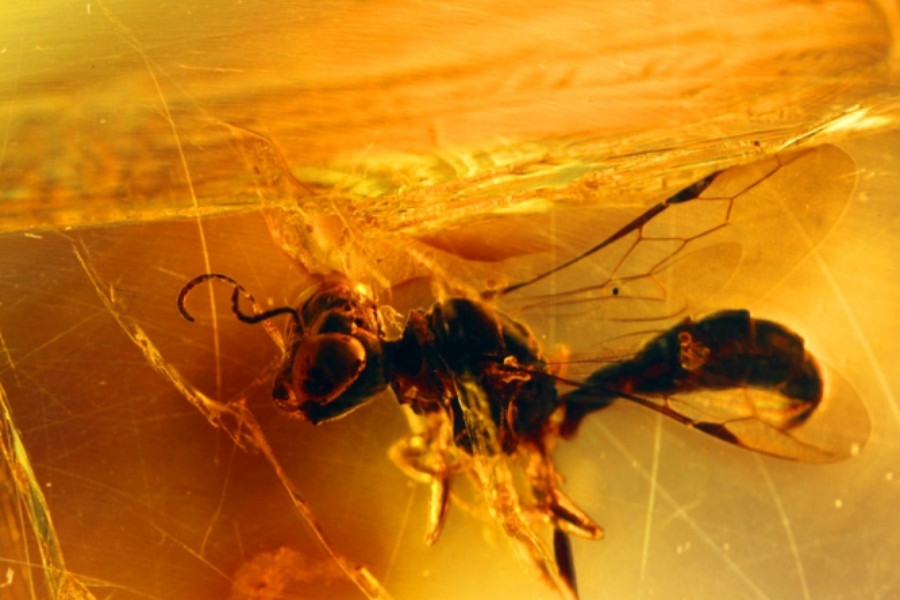 The newly opened Amber Museum in Krakow has prepared a real treat for amber lovers and those who are not yet: the "Amber - its beauty and history" exhibition, which introduces the world of this fascinating stone.

The exhibition "Amber - beauty and history" introduces visitors to the issues of basic knowledge about amber, the most abundant organic mineral in Poland used for making ornaments for centuries. The beauty of amber - shown primarily as a set of lumps presenting basic varieties and smaller polished specimens in combination with examples of contemporary art - at the exhibition is a kind of introduction to the story of its history.

Raw amber along with a drawing of the reconstruction of an amber-bearing forest - developed solely on the basis of a catalog of plant inclusions preserved in amber up to a pot with amber products from archaeological excavations - are the main theme of the exhibition.

During the last 40 million years of Earth's history, amber has traveled in nature without human intervention: from sticky resin in the forests of Fennoskandia to a lump found on the Baltic beach. He wandered with river waters, along with sand, gravel and silt, to the former Eocene sea, on whose northern edge he settled in the Palaeogene Gdańsk Delta (formerly known as the Chłapowo-Sambian Delta) - this is the largest, currently still exploited deposit on the Sambian Peninsula ( Russia). In the last million years, the ice sheets and rivers flowing out of them have shifted (redeposing) part of the deposit to the south, where we can find it in the order clays of northern Poland, the sand cones of the Kurpiowszczyzna zand, sediments of the Kashubian river valleys and modern lowland rivers. The last stage of amber migration - from the same forest as "was at the beginning", and from the same delta that the hypothetical Eridan River embedded and which the glacier had previously exploited - are today the beaches of the Baltic Sea. The sea, which was created only 8,000 years ago.

A similar scenario was written by nature on the southern edge of the former Eocene sea. Similar settlements were created there, in which we find amber from forests overgrowing the land by geologists called the Ukrainian shield. The exploited deposits near Klesów in western Ukraine are known, and amber accumulations in the amber-bearing Parczew delta (in the Lubartów poviat) are waiting for extraction in Poland.

The exhibition also shows amber products: from excavations, through products presenting folk art to collections from the post-war years in the 'What we wore in the past' section. There are not many collections from the post-war years - they are too young to appear at auctions, and too old to be seen in wider use. Their authors are interesting creators - artists and masters of craftsmanship, who have particularly written on the pages of the history of amber processing. For the inhabitants of Krakow, the products of their late Maria Lewicka-Wala, considered to be a trend pioneer, will probably be particularly interesting for natural forms in jewelry.

The exhibition ends with a small collection of fossil and subfossil resins of the world, which represent types of resins other than Baltic amber, called amber in various countries. Slightly more than a hundred resins have been discovered in the world in various sediments (from Upper Jurassic, about 150 million years ago), which are processed and some of them are used in jewelry. They are found on the markets both as natural gemstones and precious imitations of amber. In addition to their utility and decorative role, they have great scientific value and are in great demand in the collector's world.

An additional theme is the properties of Baltic amber, presented in text, photography and specimens. I hope that this didactic fragment will interest schoolchildren, although adults can systematize their basic knowledge of amber itself - an organic mineral so strongly associated with Polish culture and art.

An interesting complement to the exhibition is the presentation of a large fragment of a collection of posters on topics related to amber exhibitions organized not only in Poland - stored for years in the Museum of the Earth.

The exhibition from the collections of the Museum of the Earth of the Polish Academy of Sciences in Warsaw and contemporary art from the collection of Tomasz Mikołajczyk available at the Amber Museum was created from many years of experience not only of the author of the concept, but of the entire team of its organizers. We hope that the exhibition will arouse the interest not only of tourists but also of the inhabitants of Krakow. Private museums at galleries where you can learn something, but also buy jewelry decorated with amber are being created not only in Poland. In Krakow, an additional plus is the opportunity to examine the purchased product on site at the Amber Laboratory, and the result of the test will determine whether it was made of Baltic amber or a different type of resin.

It's here! Amber Museum in Krakow