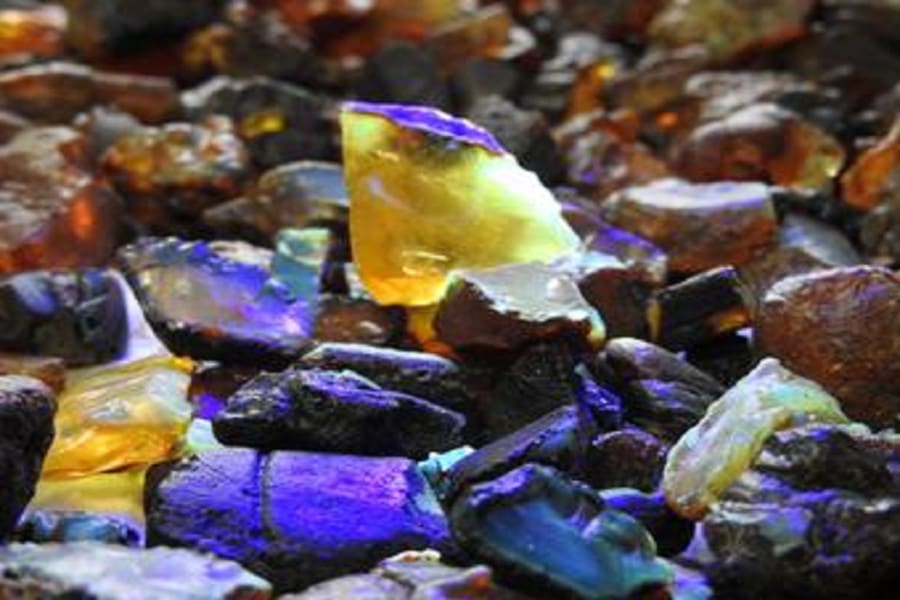 Indians, Columbus, Caribbean, mountains, donkey transport and Jurassic Park. It all sounds like a beautiful adventure trip. The history of Dominican amber, one of the most beautiful and the most interesting fossil resin, takes you on this amazing journey and adventure.

Dominican amber is derived from deciduous trees and contains from 0 to 3% succinic acid, and therefore much less than Baltic amber. It comes from the oligocene, so it occurred around 12 million years after Baltic Amber, which is the oldest and most traditional mineral used in antiquity on a global scale. You will learn more about the history of Baltic amber from our earlier articles, to which I invite you to read.

Deposits of Dominican amber are located on the island of Haiti, which belongs to the Dominican Republic. The mineral is located in the mountains of North and East Cordillera, at an altitude of up to about 2,000 m above sea level. This makes the mining process extremely extreme and very dangerous in places. Therefore, often when obtaining amber, the help of animals is needed, which is especially useful for transporting extracted amber. For this purpose, among others, donkeys (Corday, Dittrich, 2009, Kosmowska- Ceranowicz, 1985). Dominican amber was known, among others among the Indians, before the arrival of Columbus at the end of the 15th century. However, it appeared in Europe only after World War II (Weitschat, 2007).

Upon arriving from the highlands, in the valleys and lowlands, Dominican amber becomes the subject of trade and jewelry. According to artists, but also researchers of succinite (amber), the Dominican variety is one of the most attractive. Schlee (1978, after: Kosmowska- Ceranowicz, 1985) gives this variety the footnote "der Uberraschendste", which can be translated as "surprising", "sensational" (Kosmowska- Ceranowicz, 1985).

It is very popular because it is very diverse, even in terms of color varieties. Among them, the most common are transparent and also from light yellow to shades of cognac, sometimes also red and green. Species exhibiting intense fluorescence, including the rarest and therefore unusual and charming blue amber, are the most valued and sought after species, inspiring all over the world (Kosmowska- Ceranowicz, 2012; [1]). It is distinguished by its unusual color, and at the same time it is harder than the others (Linati et al. 2005; Schlee, 1980), usually it does not contain inclusions. It is interesting that due to the properties of blue amber, the inclusions contained in it would seem like crushed. This indicates strong diagenetic changes (formation of compact rock from loose rocks).

Interestingly, Dominican amber in other colors convinces with large collections of inclusions. Thanks to the extraordinary transparency of Dominican amber, it is easy to see amazing plant and animal specimens that are the object of fascination for tourists, researchers and artists. Already in the 1980s, there were over 4,500 specimens of this amber with inclusion in Stuttgart (Kosmowska-Ceranowicz, 1985). Remarkable inclusions in Dominican amber have also motivated Stephen Spielberg in the production of the film "Jurassic Park". This famous director went to the Dominican Republic to be able to feel the nature and beauty of amber up close. The film shows that a specimen of amber with a mosquito eaten with dinosaur blood was a great research material from which a new organism was cloned on the basis of DNA. Unfortunately, there is no scientific confirmation in this field. Nevertheless, after watching this film, amber began to enjoy great popularity among Americans.

Dominican amber is a revolution not only in the jewelry and amber world, but also in a sense made changes in the world of science. Originally, the name "amber" was reserved only for "our" Baltic amber, because it meant an Eocene mineral from the Baltic Sea region. After 1950, the name amber was introduced for Dominican amber, which initiated the philosophy of calling fossil resins amber with the addition of geographical specialization (Matuszewska, 2009).

Facts and myths - amber, or what?