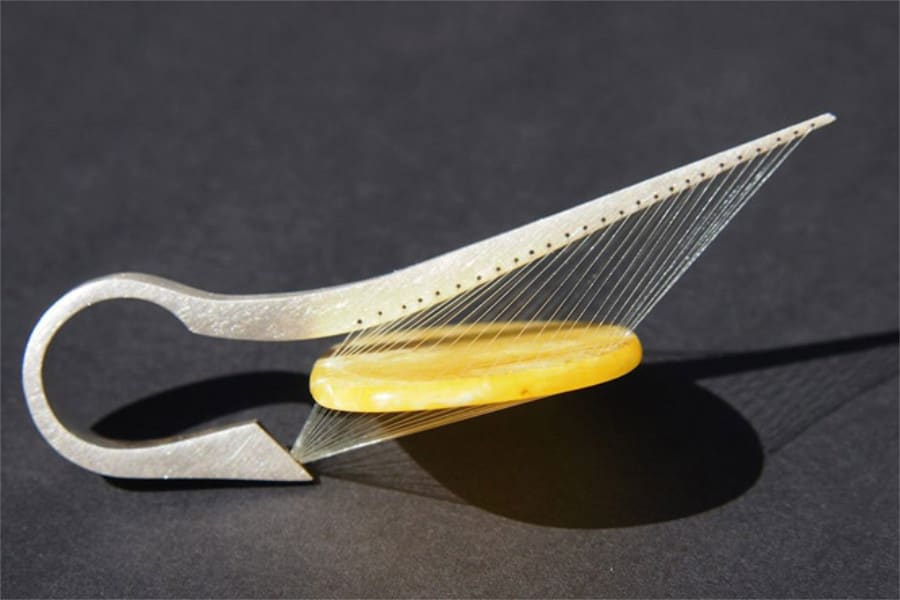 The combination of amber and silver is so common that it often smacks of banality. However, in the hands of a creative creator, he can become a work of art. As in the case of Tomasz Ogrodowski and his ring, Amber and Silver from 1998.

The ring, which was created almost 20 years ago, still surprises and impresses with the concept referring to the trend of constructivism. Of course, the decorative value is important here, although the unique idea of combining amber with silver comes to the fore. "I had an amber patch at my disposal and wanted to frame it unconventionally. And as I like challenges, the idea of hanging a flat disk of amber came to my mind like a modern bridge. In this way I managed to get an additional effect that would not be possible with a standard luminaire: the beauty of natural stone was further emphasized by the light that shines on it from two sides "- explained the designer.

Amber has been hung here on nylon strands in such a way that it does not come into contact with the silver frame at any point, and yet it hangs very stable, giving the impression of lightness, even ethereal. This is one of the features of amber that fascinated Tomasz Ogrodowski many years ago: its lightness, thanks to which even impressive forms are not heavy. "I like working with amber because its natural beauty can be used in a thousand ways," he says. Despite this, the designer does not have many amber jewelery designs in his portfolio, which elevates each existing one to the rank of a unique.

Tomasz Ogrodowski has been designing jewelry for over 30 years. With the same creativity as jewelry, he also designs utility items. He has worked closely with Swarovski for many years, and his designs are published in the Trend Book published by her. He specializes in 3D design - he has many significant achievements and participation in international exhibitions.

The amber version of Leonardo da Vinci's "Lady with a Weasel"