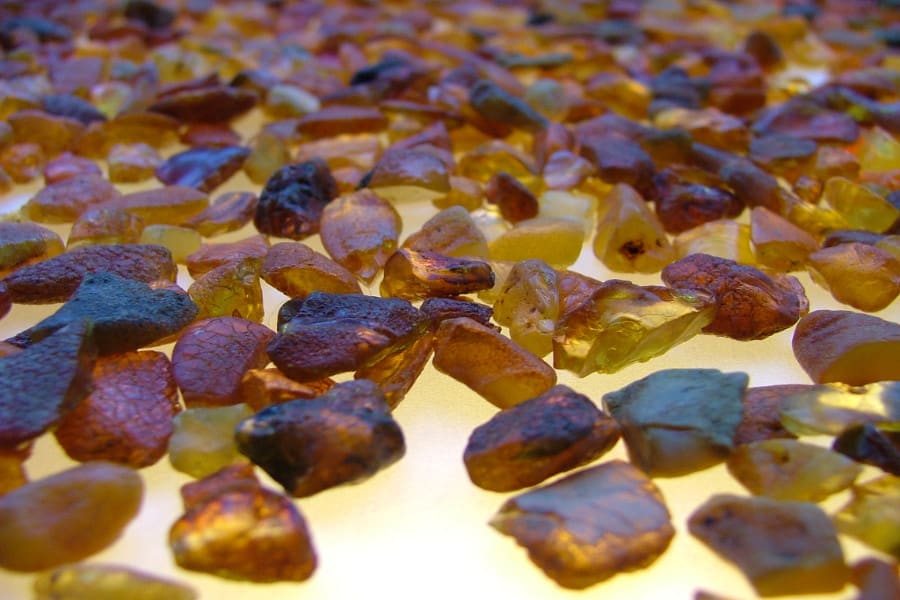 Amber is the first decorative stone ever used on a mass scale. He was known among others to ancient Greeks, Romans or Egyptians. He even reached the Arabian Peninsula and the Far East civilization. From the beginning, he also accompanied cultures inhabiting the Baltic territories, which is why he is strongly embedded in the European, and above all Polish jewelery tradition. (Brochure Baltic Amber [1]; Grążawska, Kowalski, Sukiennicka, 2011).

Amber, due to its color, aroma and unusual health properties, attracted attention already in the Mesolithic times (8000 - 4800 BC). In the following centuries it gained popularity becoming the object of interest of artists, jewelry lovers and traders of the ancient world. Therefore, I will try to present his role in individual cultures.

In Greek culture, the use of amber touches on the beginnings of Aegean archeology and Mycenaean culture. H. Schliemann in 1874, exploring the history and culture of this area, found in the tombs more than a thousand amber artifacts (Beck, Southard, Adams, 1972; Czebreszuk, 2013). Investigation of infrared spectrometry by the KWBeck method (Beck, Wilbur, Meret, 1964; Czebreszuk, 2013; Koziorowska, 1984) allowed to determine that the amber elements found in ancient artifacts belong to the Baltic amber variety. Today, more than 3.5 thousand monuments with elements of amber are known from this area, and they come from 1700-1000 BC First of all, they relate to art related to religion, or more specifically to the cult of the dead, and therefore sepulchral art (Czebreszuk, 2013). The great significance of this mineral in ancient Greek culture can be proved by the multitude of its forms. The finds include both amber with spherical form, but also flattened, lentil, barrel and cylindrical amber.

Their shape and form changed as time passed and fashion changed. Therefore, we have decorations characteristic of the time 1700-1400 BC, as well as those from the time around 1000 BC (Czebreszuk, 2013).

On the other hand, amber on the Apennine Peninsula was already known to the Etruscans, i.e. several centuries BC (Baltic Amber Brochure [1]). The increase in its importance and the development of trade led to the creation of a trade route beginning in the Adriatic Aquileia and ending at the Baltic Sea, known as the Amber Route. At that time, it was a sign of the strength and greatness of the Roman Empire, while it could promote the development of culture in Poland. Our ancestors had the opportunity to stay with visitors from ancient Rome, learn about their culture and products, including dishes, cufflinks or the well-known ceramics "terra sigillata" (De Navarro, 1925; Wielowiejski, 1983). Therefore, it is not surprising that amber appears in the works of famous historians and writers of ancient Rome. Pliny the Elder writes about amber in "Natural History" describing "Expedition of Roman equites for amber" (Kolendo, 1970).

In the Baltic areas, amber appeared during the Neolithic period (more precisely between the 5th and the 2nd millennium BC). From this period, the most common finds are circular and oval pendants, tubular and cylindrical beads, pendants, as well as lumpy lumps with a V-shaped hole. Amulets in the form of discs with a hole in the center were also popular. Along with time, interest in amber grew. In the Bronze Age, mineral began to be combined with glass and bronze elements, amber art developed. (Grążawska, Kowalski, Sukiennicka, 2011). In the first centuries of our era, the Baltic areas were part of the Amber Route. It is interesting that Poland was a transit country for amber not only in the west and south of Europe, but also in the following years a significant force in popularizing the mineral in the East. For example, from Poland through Kiev or Lviv, amber reached Turkey and Persia (Daszkiewicz, 1980). At the end of the 19th century and the beginning of the 20th century, hidden treasures with amber and Roman denarias (coins) were found in what is now Poland, which confirms the importance of amber in the ancient world and in Polish tradition (Wielowiejski, 1998).

The archaeological curiosities are worth mentioning that it was in Poland that the largest archaeological discovery of amber was made. In today's Wrocław, so-called "Amber deposit from Partynice". Its history dates back to the 1st century BC, and the size of the find is deposits weighing up to almost 1800 kg (Niedźwiedzki, 2014).

The achievements of archaeologists may testify to the importance of amber in archaeological tradition and history. The most important trade routes of this mineral passed through Polish lands. It is known that this extraordinary stone has fascinated people from ancient times, and most importantly it still enjoys constant interest.

Between history and modernity