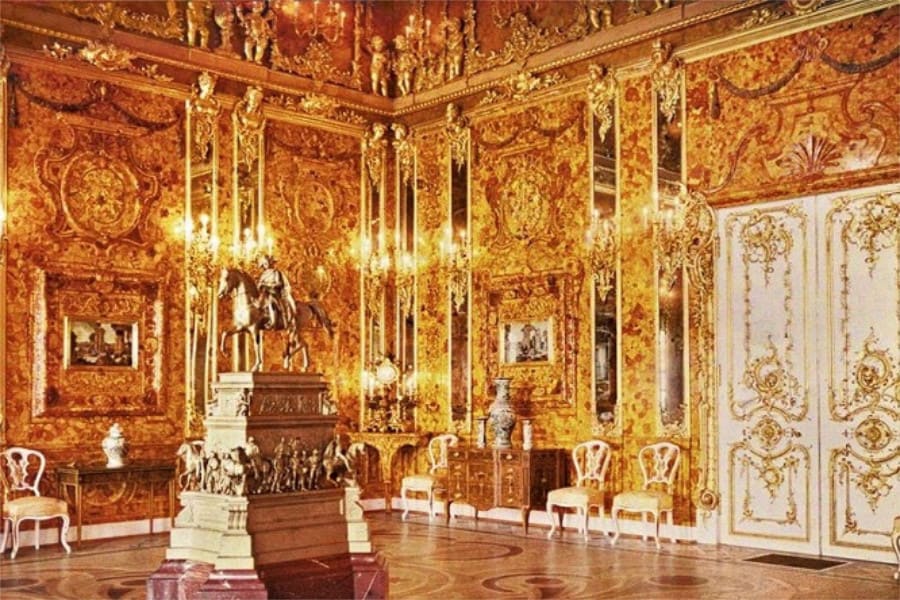 The most famous work of art in the field of amber. One of the most famous and mysterious works of art of all time created from amber is - the Amber Room.

The construction of the chamber began in 1701. Initially, it was located in the palace in Chalottenburg, the seat of Friedrich I, the first king of Prussia. Designed by German baroque sculptor Andreas Schlüter and created by Gottfried Wolfram, a Danish sculptor.

During his visit in 1716, Peter the Great was so enchanted by the chamber that Friedrich I gave it to him as a gift that was supposed to strengthen the Prussian-Russian alliance. The chamber was taken to St. Petersburg. In 1755, Tsarina Elizabeth transferred her to the Catherine Palace in Pushkin, also known as the village of Tsar. Italian artist Batlomeo Francesco Rastrelli has remodeled the room to fit a new, larger space. After another 18th-century renovation, the chamber was 90 m2 and shone with 6 tons of amber and other semi-precious stones.

Historians estimate that, at that time, the chamber was worth 143 million dollars today. After World War II, the Amber Room was lost, although some reports provided information on the survival of some of the chamber's components.

In 1979, reconstruction work began on the Amber Chamber in the Cara Village. They lasted 24 years. Using original sketches and old black and white photographs, every effort was made to reproduce the Amber Chamber. The works concerned 350 amber screens and accessories decorating the chamber. Another problem was the lack of qualified craftsmen. The only Pole who helped in the reconstruction was Wiesław Gierłowski. In 2003, work was completed.

Fauna and flora of the amber forest, which is a few words about inclusions in Baltic amber