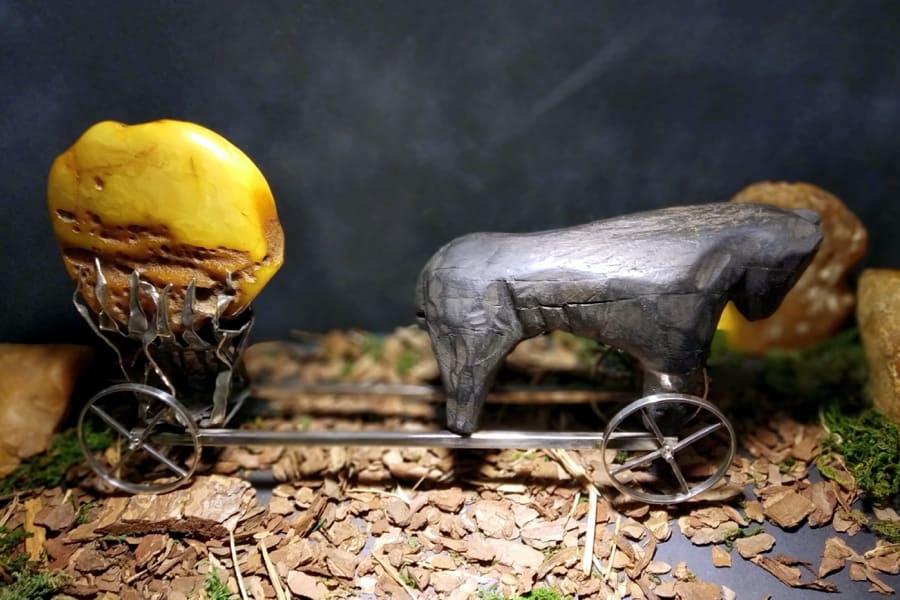 One of the stories is that ambers are fossilized tears of Heliad, Faeton's sisters who was the son of the sun god. Harald Popkiewicz inspired by mythical history and sunny stone, created a unique object that can be admired in our Museum.

Spring has come to the Amber Museum, due to a sunny chariot by Harald Popkiewicz, illuminating the Museum.

"Chariot" was founded in 2006. For 12 years it was an exhibit of the permanent exhibition of the Amber Museum in Gdańsk. From April, Harald Popkiewicz's work can be admired at the Krakow Amber Museum.

At a time when the origin of amber could not be scientifically explained, its difference from other stones - the forest smell, extraordinary lightness, unusual color - the answer to the bothering question was sought in religion and folk tales.

Greek mythology attempts to clarify the issue of the origin of amber in myth about Faeton, the mortal son of Helios and the sea nymph Klimene. Phaeton grew up in the realm of mortal Merops, his mother's husband, an okeanid. He doubted that the blood of the sun god was flowing in his veins. To prove that he was the son of the divine Helios, he stood before his father and asked for one wish: he wanted permission to drive a solar chariot. Helios, having promised to fulfill his wish earlier, could not withdraw his word - he agreed to Faeton's dangerous whim.

The son of the sun lacked the skill of driving with narrow-winged horses pulling a chariot. Despite his father's warnings, he left the trail marked out on the blue vault - the horses were terrified of the tense Sagittarius arc and approached the Earth too much, which threatened the fire of heaven and earth. Helpless Helios could not help his son, he did not want to expose himself to the wrath of other gods. Zeus threw a lightning strike to prevent catastrophe, and he fell into the Eridan River. His sisters Heliada mourned his brother while they were lying on the banks of the mythical river until the gods did not have mercy over them turning them into poplars, and their tears into amber drops.

The silver chariot is an elaborate fitting for the magnificent milky lump of amber symbolizing the Sun. Inspiration for the creation of the car was suggested to the artist by his sons, who are archaeologists by education. These were publications on miniatures of ritual bronze carts discovered in northern Europe. The ox pulling the mythical cart was made of a piece of black oak found on the beach in Mikoszewo, and then was impregnated with beeswax. The silhouette of an ox resembles rock paintings from thousands of years ago. Maybe this ox is a reference to the holy cows inhabiting Trinakria, the island of Helios mentioned in Homer's Odyssey?

Harald Popkiewicz is one of the most recognizable Polish amber makers. Since 1973, natural shapes of amber have inspired the artist to create interesting spatial forms in silver and amber. From the beginning of the 20th century, Eryk and Olaf Popkiewicz share the father's amber passion.

Flowers of Podlasie - the Bondarowski collection