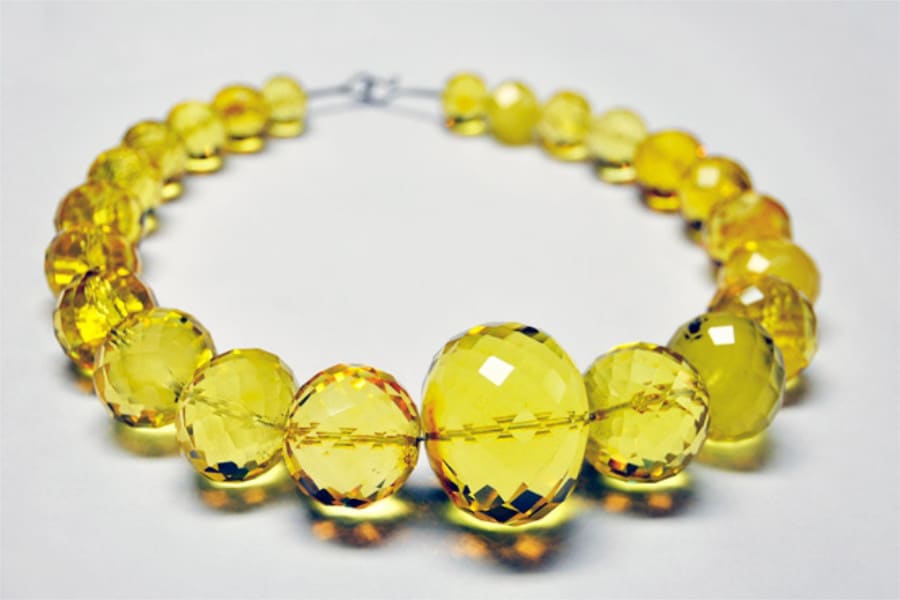 At the Amber Museum in Krakow, you can see a unique exhibit: a copy of the amber necklace of the Duchess of Brest. Performing it, Marta Włodarska discovered that the original from 1610 exhibited in the Castle Museum in Malbork is not at all ...

The history of this discovery may not be as fascinating as Dan Brown's novels, but it is certainly very interesting - especially for amber lovers. In 2009, the Museum of the Silesian Piasts in Brzeg asked the young designer Marta Włodarska to make a replica of the amber necklace of the Duchess of Brest, Dorota. It was to complement the reconstruction of the 700th anniversary of the creation of the Duchy of Brest, celebrated in 2012, the full costume of the duchess, together with items found in her sarcophagus: footwear, silver belt and gold jewelry.

The designer, wanting to perform the order as professionally as possible, began collecting documentation about the necklace. She directed her first steps to the Castle Museum in Malbork, where the exhibition presented a necklace signed as once belonging to the Duchess of Brest, dated 1610. What a surprise she was when in the famous book of an outstanding amber expert Alfred Rohde Amber - German material. Artistic processing from the Middle Ages to the 18th century from 1937 she found a photo of the Sybilla necklace, on which it looked different than the one from Malbork (in the 1930s this necklace was in the collections of the Silesian Museum of Applied and Ancient Art in Wrocław). Both items differed significantly in the shape of the beads, their dimensions and the cut.

Marta Włodarska, however, decided to make a copy of the necklace from the Malbork collection. She presented it for the first time during the International Amber, Jewelery and Gemstones Fair in Gdansk in March 2012. Although it was only a copy, it still aroused great interest combined with several purchase offers.

At the exhibition in the Castle Museum in Malbork, we will no longer find the Princess Sibyl's necklace, but "a fragment of a necklace - 10 beads, Gdańsk, 17th century (?)". "To my knowledge, there were many such necklaces at that time, so it really will be difficult to determine clearly whether a given necklace or its fragments belonged to Princess Sybilla. Certainly, however, our beads are not the same as the necklace reproduced in 1937 by Alfred Rohde "- explained Dr. Anna Sobecka, guardian of the amber collection of the Castle Museum in Malbork.

More on this topic:
A copy of the amber necklace of the Princess of Sibiu
Original - Copy - Compilation

Discover the magical and healing power of amber