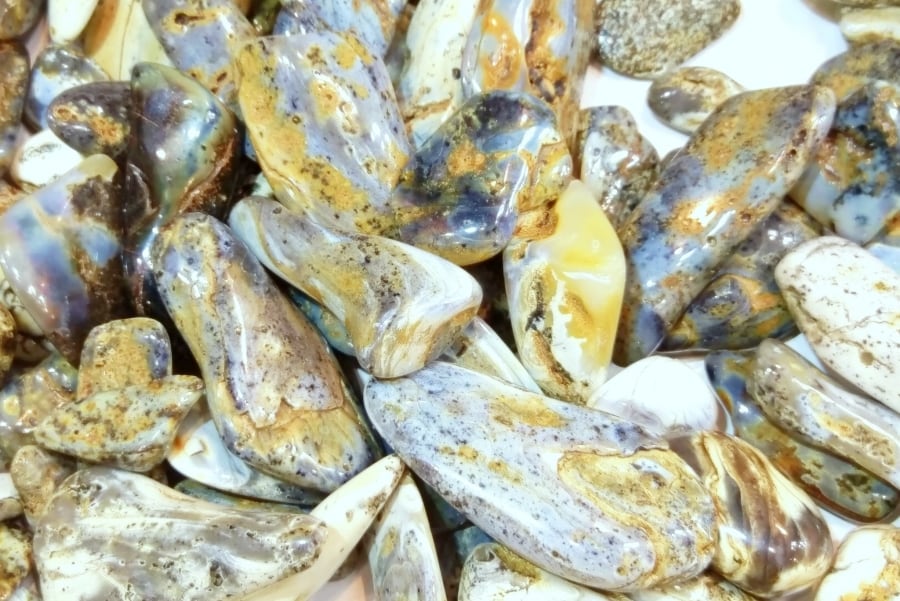 It is well known that Baltic amber comes in a wide range of colors. Dairy, yellow, orange or cognac or greenish colors are no longer a surprise. However, blue is still controversial.

Ambiguous colors, light figures and flickering effects of stones arouse admiration, sometimes in combination with suspicions. Where does this rainbow opal play come from? Why do labradorites and moonstones hypnotize with a mysterious glow? Can natural resins have colors outside the canon of browns and bile? Blue amber also raises curiosity and considerable doubts.

The fossil resin from the Dominican Republic, mined in mountain mines located near Santiago, generally has a brownish color. However, a small part of the lumps in sunlight surprises with mysterious blue iridescence. This is due to the reflection of sunlight from the surface of the stone, in which ring hydrocarbons split a beam of light, resulting in a blue color effect (photo No. 1). The color of the resin from the Dominican Republic is due to light effects, it is not the right color. In artificial light, the bodies with a blue iridescent shade are no different from other specimens of fossil resin, this effect is visible only in sunlight. This resin comes from an extinct tree species Hymenaea protera from the legume family, which was found only in tropical Central America. This effect occurs not only in lumps from the Dominican Republic, although rare, but it is worth noting that it is also found in fossil resin from Mexico.

When it comes to Baltic amber - bluish color is very rare in nature. German authority - geologist John Schlee discovered that a blue hue of amber arises when dark particles of pyrite (iron sulphide FeS are dispersed in milky white amber nuggets)2). This mineral is formed in the anoxic zones of deep parts of the seas and oceans. However, where did the pyrite come from in amber? Well, the solution with sulfur and iron ions got into the micro-cracks of amber lying at the bottom of the sea, where it crystallized in the form of metallic pyrite.

In the case of scattered pyrite in a fine crystalline form in a milky lump - we see a gray-blue color (photo No. 2). Pyrite may also appear in thick-crystalline form in the form of clearly visible veins crystallized in the amber voids (photo No. 3). Baltic amber of this color is extremely rare and very valuable. Sometimes the blue color of Baltic amber results from the modification - covering the amber with blue translucent paint (photo No. 4). The sale of such modified ambers at the Amberif fair organized by the Gdańsk International Fair SA was banned in 2018.

To sum up: the blue color of the resin may be the result of natural light effects (as in the case of the Dominican), additional inclusions (pyrite in the gold of the Baltic Sea) or the result of modification processes.