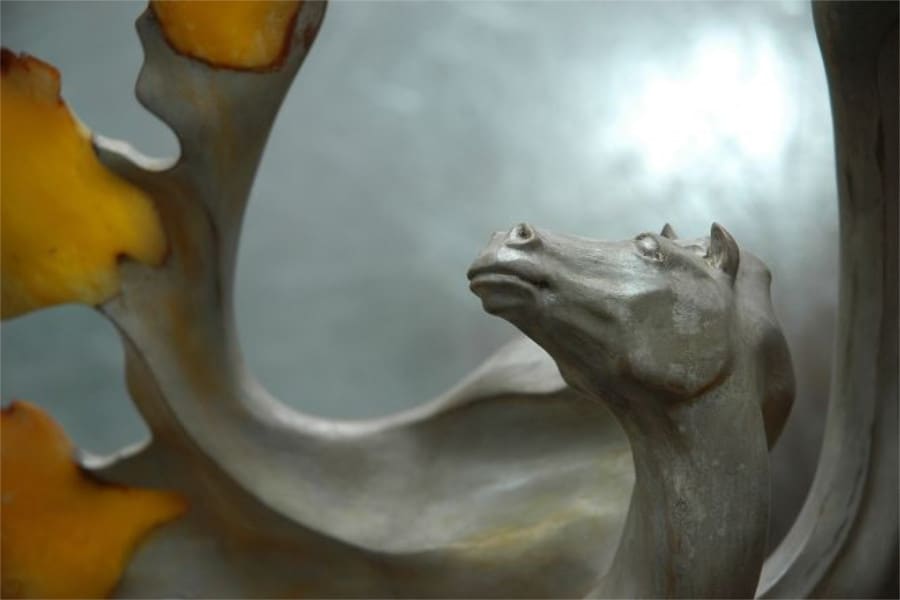 At the Amber Museum in Krakow, you can admire the sculpture of the winged horse of Krzysztof Jacek Sumeradzki.

In Greek mythology, it was believed that the Pegasus was born from the blood of a jellyfish, which spurted when Perseus cut off her head.

Krzysztof Jacek Sumeradzki is a contemporary artist-sculptor, graduate of the Post-Secondary Advertising Studio in Ciechanów, member of the Creative Work Association in Ciechanów and the Association of Polish Artists of Polish Applied Arts in Warsaw. According to the creator: "He probably inherited his passion for art from his mother, who was an art teacher." Sumeradzki's artistic achievements can be admired at exhibitions organized in the country and abroad.

The works he creates are a reflection of his fascination with man. It refers not only to modern times, but also to legendary, fantastic and mythological characters. Many of his sculptures have human silhouettes, especially female. As he says: "Already in elementary school I carved small things: Indian totems and bracelets and rings for the then chosen women of the heart. The Indians were passionate about me like every boy, and girls similarly. "He tries not only to present the charm and beauty of the female body, but equally discovers her soul.

Sumeradzki makes his sculptures mainly in wood, combining them with Baltic amber, copper, silver, precious stones and crystals. According to the creator: "Wood gains full life in combination with other materials." He began his adventure with amber from Dominican fairs, where he bought valuable nuggets of "gold of the north".

"Pegasus" made of silvered pear wood, Baltic amber and stone. The sculpture is 86 cm high and fascinates the public. The use of amber as a finishing of wings enlivens the sculpture and stimulates our imagination - it shows treasures hidden under the apparent simplicity of wood - after all, the resin of the tree is its integral part.

The amber version of Leonardo da Vinci's "Lady with a Weasel"

A woman according to Mariusz Drapikowski